If you back Kaleidoscope starting at the $5 level you can choose as your reward a tete-beche ebook containing two stories. One of those stories  is “The Company Articles of Edward Teach” by Thoraiya Dyer. Today we have Alisa and Thoraiya to tell us about their experiences working on this story. 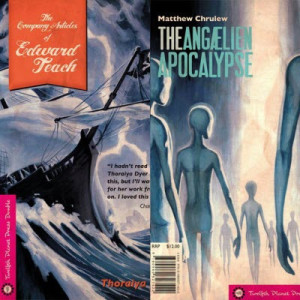 “The Company Articles of Edward Teach” is available as a backer reward!

I asked Thoraiya to write a bit about the background of writing “The Company Articles of Edward Teach” for this blog because the experience of working to produce this book with her was such an enjoyable and eye-opening experience for me. On the one hand, it shouldn’t have been so surprising, after all I lived and worked in Israel for almost a year after my undergrad degree and lived with an eclectic bunch of Arab Israeli medical student room mates. And spent hours and hours in heart to heart talks about everything under the sun from boys to religion to politics to cooking.
But one day out of the blue I got an email from Thoraiya asking me to read something she wrote to see if it was highly offensive and apologising for it being a pirate story (I hate pirate stories). I was intrigued and wanted to read it immediately. And look, yeah, it does have pirates in it but for me, the overwhelming experience of reading Edward Teach was the exhiliration of her nailing the character of Avi – I’m not a Jewish guy, obviously, and I didn’t grow up in Sydney. But what Thoraiya showed me is that she knew exactly what it is like to grow up in the Australian suburbs in an orthodox religious house and wanting desperately to both conform to familial (traditional) cultural values and also assimilate into the “real world” and be “normal”.
That her background was Muslim and mine Jewish turned out, really, experientially, to just be in the details. I absolutely adored the bit where Leila talks about walking down the street shopping and being spied by people in the community who will report back to her parents where she was, when and what books she was browsing in the bookstore. It reminded me vividly of people commenting to me on having seen me out for a run in my local park the day previously. Was there to never be privacy in my life?! (No one wants to be noticed when you are 15 and exercising!!) I absolutely related to that feeling of weight of expectation that both Avi and Leila were being crushed by at the beginning of this story. Reading this reminded me of exactly how and why I bonded with Melina Marchetta’s Looking for Alibrandi, where in that case, Josephine comes from an Italian background. Maybe, just maybe, lots of the experiences and stresses of young adulthood are universal?
Thoraiya Dyer is an award-winning Australian writer based in the lush, sweeping NSW Hunter Valley. Her short fiction has appeared in Clarkesworld, Apex, Redstone SF, Nature and Cosmos, among others (for a full list, see www.thoraiyadyer.com).

“The Company Articles of Edward Teach” won the 2011 Ditmar Award for Best Novella/Novelette and Thoraiya was awarded the Ditmar for Best New Talent the same year. Her urban fantasy short story, “Yowie”, was joint winner of the Aurealis Award for Best Fantasy Short Story of 2010, and Thoraiya won this category again in 2011 with “Fruit of the Pipal Tree” from the FableCroft anthology, After the Rain.

A member of SFWA, Thoraiya Dyer is represented by the Ethan Ellenberg Literary Agency. Stay tuned for her first novel. Her other interests include archery, bushwalking, travel, and trying to hold onto the veterinary jargon that is slowly but steadily leaking out of her head with every year she spends as a stay-at-home mum.

So it was that in 2009 I sat down to write something for her suburban fantasy anthology, Sprawl, and asked myself if I was brave enough to write from a Jewish perspective. I was afraid that what came out might reveal something rotten inside of me; can you really have a migrant parent from a country that is at war with another country, and not internalise some of the bitterness, some of the anger, that comes along with that?

It was easier for me to write the parts of the story that were from the perspective of a Muslim teenager growing up in Sydney – remembering this is fiction, please do not think any of Leila’s experiences are mine! – and it was fun to write a pirate ship in a gritty, horrific way. I loved the adventure and I loved getting lost in the research. The story grew longer and longer, until it was no longer appropriate for Sprawl. But what about the main challenge? What about finding Avi’s voice?

It was my Dad’s voice I heard in my head, telling me that Jews and Muslims are brothers.

That was my answer. I didn’t need to panic. I would write Avi as though I was writing one of my own brothers. My brothers liked fast cars and pretty girls. They liked pizza, parties and escaping from under the thumb of their strict parents. I would put all that in. Then I would beg Alisa to have a look at what I had written, and if I’d revealed something terrible about myself, well, she could point it out to me and I could work on not only fixing the work, but fixing myself.

The jury’s still out on my secret heart – I keep a close, critical eye on it as it lives and grows and changes – but the story, happily, was deemed successful. After a few changes – I had gotten things wrong, despite my research – Alisa bought it for TPP’s novella doubles series.

My father had another well-worn phrase. This one followed someone’s angry response to his criticism of Israeli Government Policy. “How can I be anti-Semitic?” he would boom, embarrassing in the ears of my teenage self. “I am Semitic!”

Linguistic history lesson aside, that line sounds a different way to me, now. “How can I be anti-human?” he is really saying. “I am human.”

We all are. In any given lump of us, we find the same ratio of philanthropists to psychopaths. Even in a corporate boardroom. Even on a leaky fishing boat. Our hate or fear of other societies and cultures is magnified by failure of comprehension. Diverse fiction is a remedy for that.

Long live the free internet and Twelfth Planet Press, as they promote the spread of all kinds of stories. May future generations enjoy a worldwide, wall-less, open-plan life!

We have just one day left in our fundraiser! We’re $800 away from having some interior artwork, and $2,800 away from paying our authors seven cents a word! If you haven’t backed Kaleidoscope yet, this is your last chance!

Click here to back Kaleidoscope on Pozible and get Thoraiya’s story!