Kaleidoscope has just a couple of days left to raise funds, and only a bit over $1500 left to go before we reach out primary funding goal! Since we’re getting close, we’ve just revealed our first stretch goals. If we overfund, we’ll use the money for interior artwork and a pay raise for our authors! See our Pozible page for more information about that.

As you probably already know, we’re interested in stories with underrepresented viewpoints. In previous posts, we’ve talked a bit about people of color, QUILTBAG characters, and neurodiversity. One thing we haven’t mentioned much yet is disability. We’d love to see some awesome stories with disabled protagonists, and we wanted to take a look at some books we’ve enjoyed, and thoughts about disability in fiction.

First, here’s an article by Leah Hobson, which explores some of the portrayals of disability in SF, and the good and bad aspects of those portrayals. Hobson takes on TV and literature, and points out that all too often we see people being either stereotypes, or happily able-bodied thanks to magical cures. Both of these options are problematic, particularly since they perpetuate the idea that disabled people are pitiful and somehow less worthy than able-bodied people.

Is it fair to say that there will be no disability once consciousness or creating bodies is done by machines? I’m not sure it is, and I feel like the science fiction writing community is, by and large, taking the easy way out by not exploring it further. Is it fair to say that most people would choose to avoid the things that can lead to disability – trauma, physical imperfection – if they could? That’s probably more true, but it doesn’t mean there wouldn’t be anomalies. Anyone who has seen Gattaca knows that.

For Kaleidoscope, we hope we’ll find some stories with disabilities that are part of whole, complex, interesting characters. We want stories that don’t define people solely by their disabilities, but at the same time we also don’t want these things to be trivialized. Because we know that’s a tall order, and might seem confusing, we thought we’d talk about a couple of books with interesting portrayals of disability. 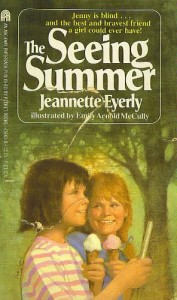 The Seeing Summer by Jeanette Eyerly is out of print now, but Julia remembers this book vividly from her own childhood. As a small child, Julia had a lot of vision trouble, and many visits to the Los Angeles Children’s Hospital for specialist appointments, including a couple of surgeries. She was never fully blind, but she was considered legally blind in one eye for many years. Growing up with vision impairment that was changing and unstable made her aware that what vision she had was never a guaranteed permanent thing. That might be why she found this book so fascinating. In The Seeing Summer, Jenny is a blind girl who moves in next door to to a seeing girl named Carey. Carey starts out feeling afraid that Jenny won’t be able to do fun things because of her disability, and their friendship has a few bumps when Carey tries to “help” Jenny when Jenny doesn’t need it. What Julia remembers loving most about the book, though, was that the focus was less on Jenny’s blindness than on the friendship, and the exciting adventure plot that left the two girls having to save themselves from a kidnapper.

All throughout the story, Jenny is a strong, complex character. She has a lot of tools and methods to help her be independent—there are special textured tags in her clothing so that she can get dressed and choose matching outfits on her own, for instance, and despite Carey’s first fears, it turns out Jenny can easily play card games, too. Jenny doesn’t need  or want a lot of extra help or pity. Once Carey absorbs that, the story really takes off and becomes a thrilling adventure story with dangerously exciting bits, and a strong friendship at its core. As a kid, Julia found hope in the idea that even if she did lose all her vision, she wouldn’t have to lose all of her independence. But she remembers loving The Seeing Summer most of all because it was an exciting story. That’s the kind of feeling we’d like to capture with Kaleidoscope. 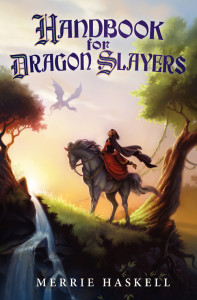 Of course, we also want to talk about disability in fantasy and science fiction, and about books that are still in print. That’s why we ‘d now like to draw your attention to Handbook for Dragon Slayers by Merrie Haskell. This book came out a few months ago, and it’s an exciting middle grade fantasy story about a princess named Tilda who really wishes she could ignore her political responsibilities in favor of being a writer. Alas, her life doesn’t allow for a lot of peaceful writing time. When a usurping cousin tries to steal the kingdom, Tilda and a couple of her friends are on the hook to stop him, and they end up going on an adventure involving magical horses, dragons, and all sorts of other cool things. The story is a lot of fun, and we think Kaleidoscope author, Jim Hines captures what we love about Haskell’s portrayal of Tilda.

I appreciated the way Haskell addressed Tilda’s handicap, neither shying away from the pain and complications it presented, nor trying to give us a feel-good Message about overcoming disability. My wife has been dealing with chronic pain for many years, and often requires a cane to get around, so Tilda’s struggle felt familiar. But this wasn’t a book about a disabled character; it was a book about a character who happened to have a disability.

Tilda has a bad leg, you see, and it slows her down, and causes her pain and annoyance, and she gets some nastiness from others because of it. The disability is irrevocably part of Tilda’s character, but it’s just that: part of her character. It’s not the sole focus of the story; that’s the adventure Tilda has.

We’d love to see more stories like these, with disabled characters who are complex and interesting, and who have adventures of their own. If you are interested in more resources about disability in YA and middle grade books, we’re also big fans of the Disability in Kidlit blog.